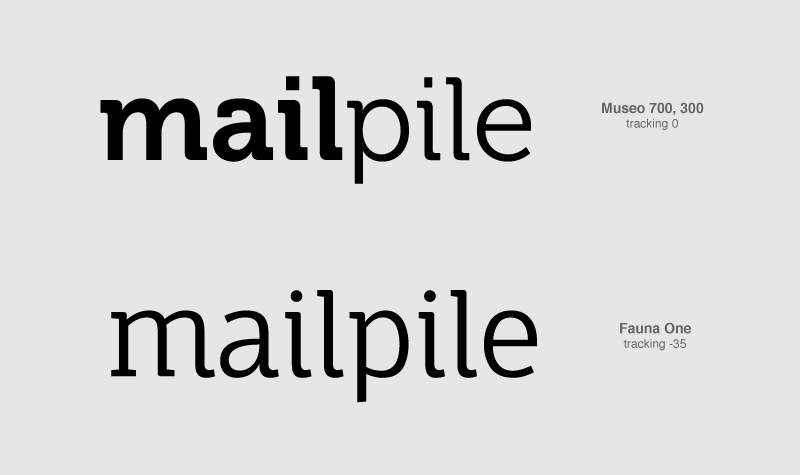 When developing free software, one of the things we need to be very careful about is compliance with copyright licenses. Any modern application uses dozens of libraries and resources, and all of them are subject to copyright. Because Mailpile is based almost exclusively on the core Python library, we don't have to worry quite as much as normal, but already we have a few dependencies. These dependencies are all free software though, so we can distribute them with Mailpile with no problem.

It's worth reiterating the distinction: Free software refers to freedom, specifically the freedom to use the software for any purpose, to study it, to make modifications, and to share it with your friends. When we say that Mailpile is "free", we mean free as in freedom - although incidentally, Mailpile is also free as in free beer - which is to say, you don't have to pay anything to use it.

A few weeks ago, we ran into a bit of a problem. It turns out that the font we have been using in our logo and in the web app, Museo - 300, 500, 700, has a pretty unusual license which allows free (as in free beer) commercial use of the font for any purpose, but does not allow redistribution of the font. Specifically, it says:

But if you read the license carefully it means the variants we are using do not cost any money, but secondary redistribution is not allowed. This means that we cannot bundle it in Mailpile, because even though strictly speaking the license would allow us to package it in the font, anybody else who would distribute Mailpile onwards - say, for instance, giving their friend a copy - would be violating copyright by doing so. This is something we cannot live with.

We tried negotiating with the font's author, didn't come to a positive conclusion. We will of course respect his wishes, which unfortunately means that we must stop using Museo. We are very sad about this, because it really is a beautiful font and fits quite nicely with the feel of Mailpile's UI. But it can't be helped, so we must remove it from Mailpile and move on with life.

After this came up, we spent a few days looking for alternatives. We found quite a few nice collections of free (as in freedom) fonts, but nobody had exactly the type of slab serif font we were looking for - something that has the same aesthetic as Museo. The best substitute we found was Fauna One by Eduardo Rodríguez Tunni, which is licensed under the SIL Open Font License (OFL), meaning it's free (as in freedom)! The only thing it is missing is a heavier weight, and an italic variant, because we like to be able to emphasize text in various ways. It would also be nice if it supported a wider character set, because a lot of our users are going to be using extended latin alphabets (not to mention potential users of other writing systems - something we'll address in another post!).

The good news is, because Fauna One is licensed under the OFL, we can work on expanding it to support the things we need. We're not entirely sure if that's what we'll do yet, but it's our best lead so far...

This entire experience taught us two things that we thought it might be worth bringing up:

(This is interestingly something that I've noticed more in the anglosphere than, say, in latin countries - many of my favorite Spanish artists distribute (almost) everything they do under liberal licenses, such as comic artist/musician Miguel Brieva...)

We're not entirely sure what to do about this, but we thought we'd bring it up and see if there's any momentum generated by it... but we know, making typefaces is a lot of work and quite difficult to do well. There are some really nice free (as in freedom) typefaces around already, such as Gentium, Lago, Andika, the TeX Gyre fonts, and so on, and we're really grateful to those who've made them, and made them available to the community at large, not just for use, but also for distribution.

In a way, this goes to show that building an application like Mailpile has a lot more facets than it seems. We could just default to whatever sans-serif font is installed on the user's system and accept that some users will have a weird look-and-feel, but we'd much rather bundle a nice default font set and only have the look-and-feel downgrade for people who actively block CSS @font declarations, or users of the text mode version of Links and other non-graphical UIs (hint: Mailpile has a built-in CLI for people like you!).