For the last four days (Friday-Monday) I have been enjoying the UK Python Conference, here in Coventry.

The conference itself was fantastic; big enough to support a wide range of topics and activities, small enough to foster a sense of community, mature enough to have a code of conduct and recognize the importance of diversity, while still retaining an informal, laid-back and friendly vibe. The organizers and volunteers should all pat themselves on the back!

I was a little bit too disorganized to propose a proper talk about Mailpile in time for the conference deadline, but I made up for it by presenting at their Saturday poster session and hosting a Mailpile sprint on the Monday.

A recurring theme of the usability studies we have done with non-technical Mailpile users, has been an element of confusion about where Mailpile sits in relation to the rest of the e-mail ecosystem. This is understandable, as web-mail, "the cloud" and mobile apps have all blurred the lines between local and remote computing. I think these days most of us, techies included, are bit confused and uncertain about where our data really lives and what that means.

Since the Mailpile approach to networking and data storage underpins how we hope to improve end-user privacy, answering this question is key to helping users decide whether Mailpile is right for them or not.

The PyCon UK poster session was a perfect opportunity to finally do something about this; I commissioned drawings which can be used to illustrate some of the expected use-cases of Mailpile, where data resides and what paths the information follows.

The main character of these illustrations is a young viking woman named Mel, who had her debut on the Mailpile PyCon UK poster. These illustrations (and more) will be re-used over time on the web-site and in the app itself, as Mel tells us stories about e-mail privacy and how Mailpile can help. 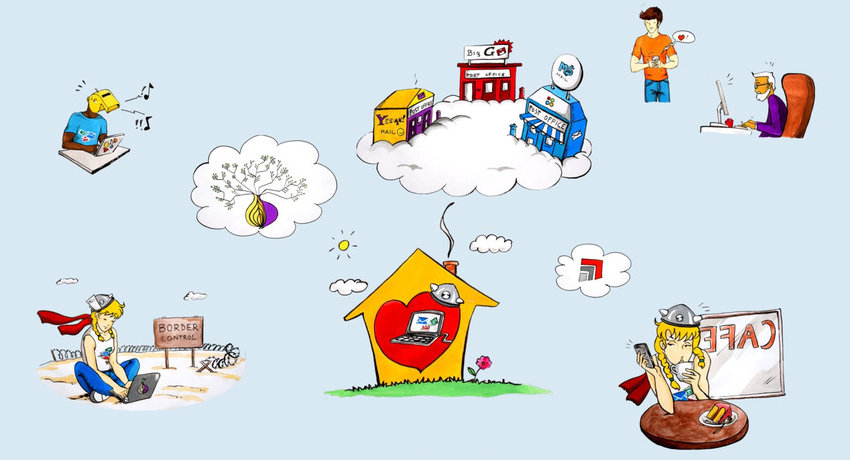 I'd like to thank the talented Emilia Telese for creating Mailpile Mel.

On Monday morning I bicycled in the rain to the conference venue, arriving a bit soaked and a bit late - just barely on time to pitch the Mailpile sprint to a room full of eager Pythonistas.

By 10am I had a team of 5 volunteers, all eager to give Mailpile a try and lend a hand. Since my cardboard box of swag had disintegrated in the rain, I kicked off the session by giving each sprinter a Mailpile t-shirt and dumping a mountain of stickers in the middle of the table. After trying on shirts and getting to know each other a bit, we got to work.

These are the tasks I had proposed for the sprint:

These are the things that got done:

In addition, I collected the following feedback from impromptu usability testing and discussions:

By my count, we accomplished every task I proposed and then some! It was a fantastic session and I learned a lot about how both Mailpile and my Python skills could improve. The only disappointment was not getting to present our results to the conference; proceedings were cut short by the discovery of a one-ton unexploded WWII bomb next door...

I would like to thank Ed Singleton, Duncan Sneddon, Matthew Power, Padraic Harley and the nice Raspberry PI hacker/web developer whose name I neglected to write down (get in touch if you read this!) for their awesome contributions and excellent company. I will consider us very fortunate indeed if they continue participating in the Mailpile community!

Plans for this week