A Roadmap to Version 1.0

My dear Mailpile backers, I am going to go out on a limb here and publish a Roadmap to Version 1.0. I feel it is important to share the current direction of things.

I am hesitant, because I have drafted plans like this twice before and in neither case did the plans work out. Project management and planning is very hard! So please keep that in mind during the coming months and as you read through this post. This roadmap is written with the best intentions, but I may well have overlooked something critical or something unforseen may come up.

That said, there are quite a few tasks on this list which volunteers might be able to help out with. In particular, the Short Setup, Autoajax and Security themes all contain multiple tasks which could be done in parallel and may be relatively low hanging fruit. If something from this list strikes your fancy, please get in touch on IRC and let me know!

So without further ado, I give to you... a GANTT chart: 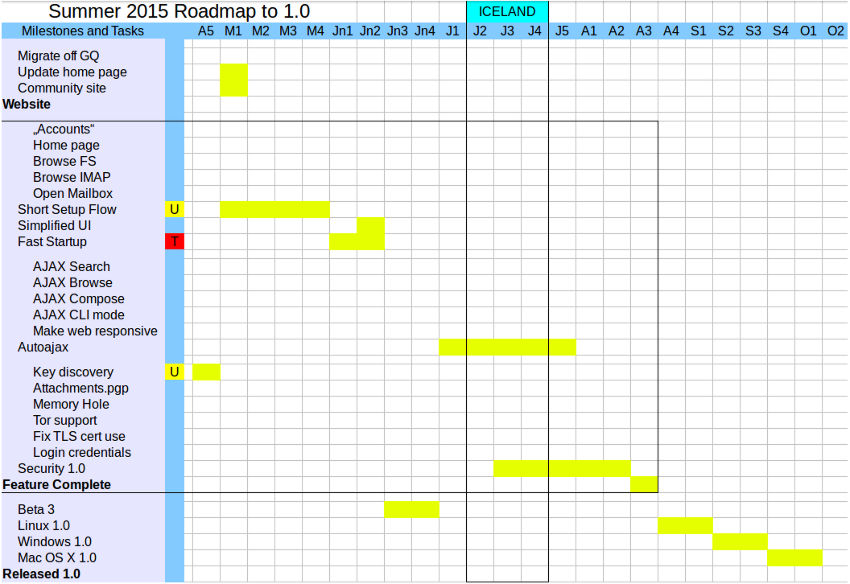 This chart shows the weeks ahead along the top, and the tasks I have chosen to focus on along the left. Filled in boxes in the area below show roughly when I expect to work on things. Not all the boxes have been filled in, but all the top-level tasks have time allocated. I have also labeled when I plan to be in Iceland for the summer, some of which will be vacation time.

The tasks of course are the most important part of this roadmap. Why these tasks, and not others? That is what the rest of this blog post is about. The order of things and the timing are less important, but when there are specific concerns they are mentioned.

The tasks fall into a few main themes: Website, Short Setup Flow, Simplified UI, Fast Startup, Autoajax, Security 1.0 and the actual releases. I will dedicate a few words to each of those themes.

Although there are admittedly quite a few new features in this plan, the team has actually been working on most of these things for months already. The intent is to not only address symptoms and fix shallow bugs, but to actually fix some of the root causes of our previous releases being so problematic. Our 1.0 will certainly not be bug-free, but it would be nice to ship it without any major known design flaws.

The project website needs to be updated so it does a better job answering the following main questions:

A very basic community site, long promised as one of the initial fundraising campaign perks, has actually been built! It just needs updated content and a launch.

Also, our hosting provider GreenQloud has announced that they are shutting down their public cloud service, so we need to move before the end of the summer. Although not strictly a 1.0-related task, this is critical work that needs to be done before the release.

Although the current setup flow is quite nice, this theme aims to shorten it to only two steps:

Although this is a very simple goal, making this possible requires adding functionality elsewhere in the app, resulting in the largest change planned for the summer.

After these two basic configuration steps, people would be taken directly to the app's home page.

The home page is a new concept. It is the starting point whenever the user logs on or start the app, presenting to the user an overview over the current state of their Mailpile. This would include a list of accounts and basic statistics about each, options to add or remove accounts, and links to a browsing interface. There will probably also be hints on this page, prompting the user towards the next steps needed to configure and use their Mailpile.

The browsing interface allows the user to explore either Mailpile's internal data, the local file system or the mailboxes and contacts associated with a particular account. It will be possible to read mail using this interface, but more importantly the user will be given the option to enable (or disable) background copying, syncing or just indexing of their mailboxes. When browsing other types of data, other appropriate configuration options should be presented instead.

Most of the tasks in this theme have to do with implementing a way to browse local mail or remote servers, adding the concept of accounts and building a nice landing page.

Mailpile currently separates what most users think of as an account into Mail Sources, Profiles and Sending Routes. This division will be maintained internally, but does not necessarily need to be exposed to the end user.

The browsing feature depends on another new internal concept: a "virtual file system" (VFS) which abstracts away the differences between different types of data sources, making them all browsable using the same metaphors and same user interface.

This theme attempts to address a few key bits of feedback from early adopters:

Other concerns which may also benefit from the VFS concept include:

As this is a major change to the user experience, this theme is the 1st priority on the roadmap. It is important to get it shipped to users as soon as possible, so we can perform basic usability tests and get feedback on whether it really is an improvement or not. If people don't like (or understand) it, then there should still be time to respond to their feedback before launching.

This theme is quite simply about removing unfinished elements from Mailpile's current user interface.

Many such elements would benefit from being split out into external plugins, so they can be developed outside the Mailpile core and have their own independent release cycles. As an example, Mailpile 1.0 may not include an address book. Instead, the current address book interface should be moved to a plugin which users will be able to add to their Mailpile without upgrading at a later date.

This theme addresses point #1 from our Beta Rejected post.

This theme is about improving the startup-time and reducing the RAM usage of Mailpile.

If a user has a lot of mail, it can take a few minutes to start Mailpile on a slow computer. This is due to the fact that the metadata index (information about subjects, senders, dates, etc.) has to be loaded into RAM before the app can start up. In addition to annoying heavy users, the resulting RAM requirements also causes problems for providers interested in hosting Mailpile for other people.

This component of Mailpile has been largely rewritten already to use an alternate strategy, but the work needs to be finished, published and a migration process needs to be created for our existing users.

A side-benefit of this work will be to improve the encryption of the search index, and reduce the risk of data loss when the app crashes or is shut down uncleanly.

This is the most technically risky part of the roadmap, which is why it is the 2nd theme after the simplified setup flow. Once this works, we release Beta III and ask our users for testing and feedback.

This theme is about improving the performance of the web interface.

Once everything is up and running, the single most annoying thing (IMHO) about Mailpile is how slow the web interface is. This is embarrassing, since from the start we've boasted about performance and being able to outperform many cloud-based web-mail solutions.

"Autoajax" is the internal code name for the progressive enhancement work which has already been done on this front. It just needs to get finished and shipped! A stretch goal for this theme is to make the web interface more responsive, so it becomes more usable on larger monitors or mobile devices.

This theme is very low risk; the worst that can happen is not all of the app gets updated and the UI performance stays unchanged for those pages.

This part of the roadmap is admittedly incomplete.

In general, this theme is about fixing as many issues as possible which pertain to our published Security Roadmap, as well as addressing point #3 from the Beta Rejected post.

The riskiest part of this theme will be to communicate the end result to our users, so they know whether the software is "fit for purpose", given their individual security needs.

Finally, the roadmap has four releases on it:

The time allocated to each release will be used for bugfixes and fixes not covered by the other themes; namely packaging work and OS integration.

The purpose of the Beta III release is to solicit feedback on the two largest changes: Short Setup and Fast Startup. It should launch very soon after as those two themes complete.

The 1.0 releases are of course contigent on tests giving positive results and development going relatively smoothly over the course of the summer.

Unlike our previous releases, we are considering the idea of launching on different platforms at different times. This reflects the fact that although most of the code is shared, the packaging and OS integration work is not. Making our Linux users wait while we finish fixing our klunky OS X integration is probably undesirable, except perhaps from a marketing oriented point of view.

What do you think?

That's it! Mailpile's future, for the next few months at least.

Feedback is most welcome. Please find us on IRC (Freenode, #mailpile) or on Twitter.