The Mailpile desktop platform team got together for a miniature developer summit in Reykjavík, Iceland. Alex, Pétur and myself all flew in from our corners of the globe, and Oktavía welcomed us and made sure everything went as smoothly as possible.

We spent some time working at Stofan, my favourite café, and some time hanging out at the offices of 1984, who graciously lent us desks and a meeting room. Thank you, 1984!

It was really nice to have the whole team together in one place.

We ate some traditional Icelandic food, tasted some Icelandic hipster-beer, chatted and just gelled a bit as a team. I got a chance to give everyone a bit more insight into Mailpile's background, discussing everything from PayPal freezing our funds to GnuPG integration challenges to extracting spreadsheets from e-mail to introducing Mailpile Mel.

The main event though, was to get a bunch of helpful humans to come test the Mailpile installers and desktop integration. 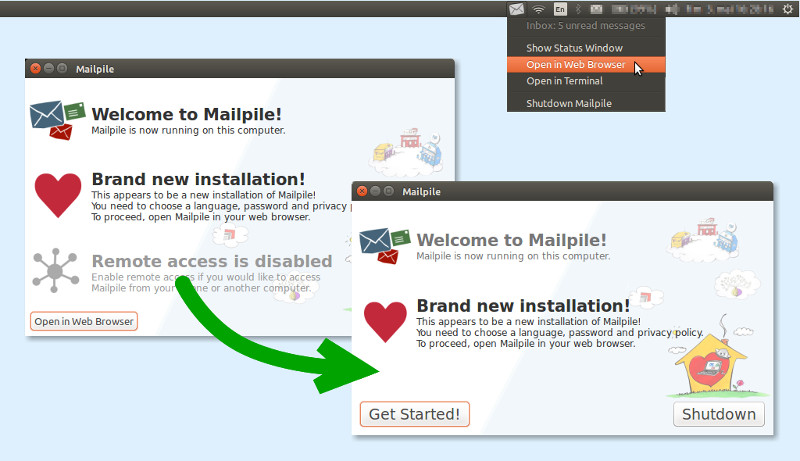 The more familiar you are with something, the harder it can be to see it clearly. You see what you expect to see.

In software, this means software developers quickly become blind to the flaws of their own code. We literally cannot see them! Getting a fresh pair of eyes is invaluable, especially if you are interested in understanding which parts of an interface are confusing or unclear.

To compound matters even further, everyone uses their computer in a slightly different way. The way I use Mailpile may work perfectly, but if you do things in a different order, use a different mail server, run on a different version of Linux ... any of those differences may trigger a poorly tested code path and uncover a bug.

Usability tests can be as simple as asking a friend to try your thing and just watching how they do and taking notes. It doesn't have to be complicated to provide value and I encourage all software developers to just grab a pen and some paper and watch people use their stuff. You always learn something!

In our case, we had some quite specific goals, so we were a little bit more methodical.

How we tested, and why

For this round of tests, these were our main goals:

As a result, our installation sequence and the initial setup process needs to gradually introduce these concepts. We wanted to get a feel for whether it was actually succeeding.

Oktavía scheduled and recruited a moderately diverse group of volunteers to come test. All told we had 3 men and 3 women, of mixed ages. Some were Windows users, others Mac users. They were all tech-savvy enough to own their own laptops, but not necessarily programmers themselves. Some digital natives, some less so. Roughly our target demographic for our next release.

The structure of the test itself was relatively simple.

We tested with one volunteer at a time. Each time we started with introductions, explaining roughly what Mailpile was and what we expected of our volunteers. We warned them we wouldn't help them much, asked them to think out loud if they could. Made sure they understood that failures and problems were good, that breaking things would help us identify things to fix.

Next, each person was given a USB stick with an installer on it and instructions to attempt to install Mailpile and go through the initial setup until we told them to stop. Once stopped, they were to exit and shut down the app. We watched over their shoulder and made notes. We tried to resist the urge to answer any questions, to see if they could figure things out themselves.

Finally Oktavia asked a few questions about the experience, we thanked them, gave them stickers and chocolate and sent them on their way!

Even a simple, short test like this has many potential pitfalls.

If the answer to any of these questions is "no", then we would like to understand why, so we can fix the problem.

The answers in this case were mostly good news! Which is refreshing, since last time we tested Mailpile in this environment, the result was so many failures and so much confusion that we went back to the drawing board.

We found some minor bugs, but everyone managed to install the app and complete the first stage of the test. Good news! Nobody was frustrated, most confusion was minor. Also good news!

Shutting down the app was the main failure; most of our participants thought they were done when they had logged out of the web interface. But, we have ways to address this. And worst-case, we need to make sure Mailpile shuts down cleanly when the computer powers down anyway.

To sum up the main lessons:

We learned a lot!

Watching people use the app and interact with our work was very stimulating. The next day we had a (somewhat hung over) brainstorming session, discussing how things could be different or better. In the end we felt comfortable continuing with a mostly unchanged design. The issues were mostly minor and felt fixable.

So, we're on track! The next step will be to fix the bugs and get some "alpha" packages ready for wider testing.